In the Netherlands, the community still falls short of government and market. While the latter can draw a great deal of lessons from community practice. 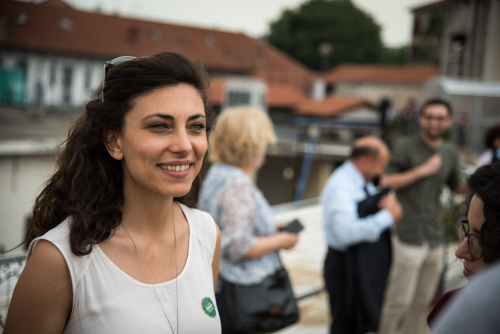 We interviewed Emanuela Saporito, researcher and consultant at Labsus for governments, NGO’s, and active citizens on issues of shared administration of common goods. What can we learn from the Italian practice, and what obstacles should we be wary of?

Emanuela Saporito obtained her PhD at the Polytechnic School of Milan in spatial planning and urban development. Participatory and community planning are always at the core of her work, both in science and in practice. An important question in her work is how community action can transform urban space and be the origin of a placemaking practice.

In 2015 she joined Labsus, a cultural association and an online platform collecting stories of bottom-up practices taking care of urban commons all over Italy. Its main scope is to elaborate on the concept of Horizontal Subsidiarity, a   principle stated in the Italian constitution that legitimates community action by sharing the power with the public authorities to act in the urban realm. This was introduced in 2001, but in the following years the concept was mainly considered to support the process of privatization of public services. A group of researchers in public and administrative law challenged this interpretation, arguing that horizontal subsidiarity should be about fostering citizens in acting for the general interest, contributing at the same level as the public authorities. It should not once again be about delegating and privatizing public action, it should be about cooperation. This interpretation closely follows Emanuela’s definition of community power:

“In my work, I start from the concept of the urban commons. In this sense it is not about the perspective and aims of the public authorities, but about the vision and needs of the community. When the community acts by regenerating a part of public space, like a park, it fosters a process of appropriation. The community acknowledging what is important and what is not. It’s about taking their part of the power. And they are entitled to do so, because there is a principle in the Italian constitution that enables this use of power by citizens to act for the general interest. I think this results in a shift in interpreting the relationship between citizens and government, it is another way of framing citizenship. So, my right of being a citizen is not only expressed in my ability to vote, it also has a very practical dimension in exercising power for acting in the general interest.”

A very concrete example of citizens using the principle of Horizontal Subsidiarity can be found in the city of Bologna, which adopted the regulation in 2014 because the municipality wanted to facilitate active citizenship. According to Emanuela, one of the exemplary cases concerned a group of residents in a working-class neighbourhood, who saw an old community centre deteriorate, since the local government and public housing association no longer took care of it. The residents united to save the building and voiced the importance of the building for the neighbourhood. It had the potential of becoming a new cultural and civic community centre. The difference between this process and how it usually goes, is that the community took matters into their own hands, with the help of the Regulation on urban commons. They started renovating the building and asked help of architects in the area. The municipality then offered them the building for free and paid for the fixed expenses. Collaboration was at the heart of this process.

“It really is a paradigmatic shift from a competitive approach to a cooperative approach”, according to Emanuela. “So, it’s not about ‘I have money and I create a tender to again delegate for instance the healthcare service to private organization’, it is much more ‘we co-design the healthcare service in order to combine public resources with private and community initiatives.”

Even though this is a good example of the potential of the principle of Horizontal Subsidiarity, processes like these don’t always work out this way. In a sense, the principle is about a sharing power between government and citizens. And not all parties are thrilled with this idea. Emanuela mentions that in general, local governments have three possible reactions to this regulation.

At this moment, the individuals working within the institutions are the most important advocates of change.

Labsus also experiences obstacles along the way. The organization works on two levels. On the one hand, they conduct research, produce knowledge, and offer training. On the other, they play a very practical role. They do so by accompanying citizens groups in drafting collaboration pacts and facilitating co-design processes. Emanuela elaborates on the challenges of this double role:

“The most difficult thing is that we have our feet in two different shoes. One foot within the municipality, and one outside. Sometimes people want you to take a side, but since it’s a cooperative practice, we can’t take a side. It’s important for us to stay in this shared framework.”

Furthermore, a very key role could be played by the ‘third sector’, such as associations and NGO’s. However, many are not convinced of the regulation, which would mean that they as well could lose some of their power. Here lies another challenge for Labsus, in trying to let them understand that this is another way of conceiving their public role. “They can work on advocating such kind of spaces for informal participation”, Emanuela stated.

Besides continuing their important work, the people behind Labsus wrote a manual, named ‘Horizontal Subsidiarity in the European Union’. Asking the question: “is it possible today, starting from the Italian experience, to translate the power of the powerless into the power of active citizens who find in subsidiarity a tool for direct participation in democratic action? And is it possible for this to happen on a European scale, taking Articles 10 and 11 of the Treaty on European Union as a reference? And again, can the Italian model of shared administration constitute a virtuous precedent that can be exported and replicated, albeit in a different way, in the rest of the European Union?”

Hopefully we, in the Netherlands, can learn from this inspiring Italian Practice, and work together on reclaiming public space. Firstly, and most importantly, as citizens.